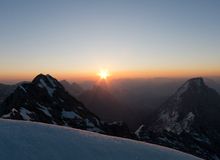 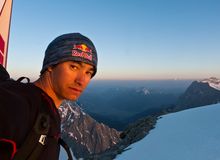 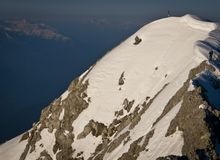 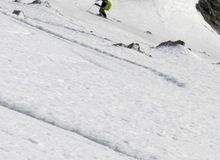 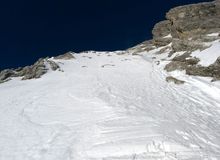 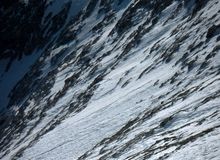 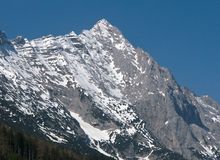 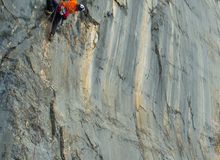 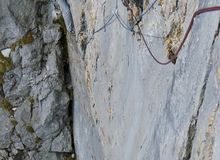 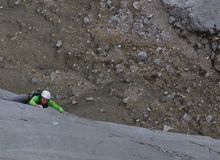 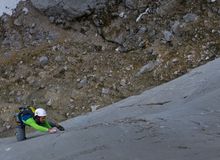 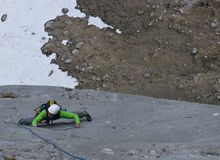 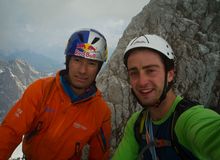 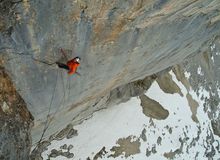 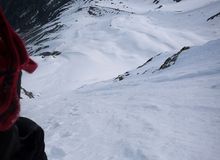 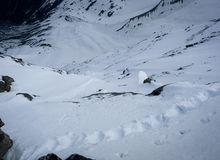 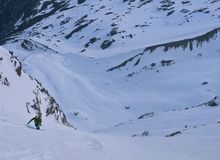 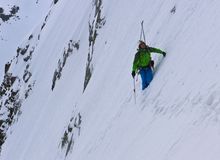 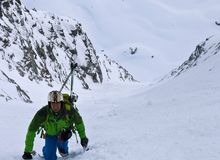 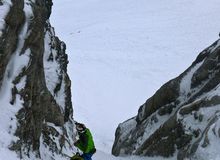 21.4.11: Reini Scherer and I are starting at 3:00 a.m. from the parking lot. With the skis on our backs we’re walking on a forest trail and then on steepening grassland. After one and a half hour we’re taking a break.
Our aim is the top of the „Hoch Wand“, part of the Mieminger chain. Reini has a ski project here, which is following him for years: He wants to do the first descent on skis of the NE-face.

After ten minutes we’re walking on and after a short time we’re over and done with the 1.600 metres up to the summit. On an easy ridge we’re walking to the entrance in the NE-face. Reini is doing his first swings, it’s quite steep (50°). Because of the little snow this winter we have to rappel down for 30 metres three times. The rest is working out pretty good and at 10:00 a.m. we’re already back in the valley again.

25.4.11: “Locker vom Hocker” at the Schlüsselkarspitze was one of the first alpine routes in the 8th grade. The route was first done in 1981 by Wolfgang Güllich and Kurt Albert and I wanted to climb it for quite some time.

Florian Klingler and I took the bike near the Wetterstein hut. From there we had a slow-paced walk to the start of the route. I climbed the first pitch. A genius crack, perfect to place friends and nuts. Florian climbed the second pitch and I did number three and four. So we did until the exit.
The route was worthwhile, although the key pitch is a little bit wanted and against the logical line.

26.4.11: Together with an old friend from school i went to the Geraer hut/Valsertal on April 22nd. We wanted to climb a new line in the Schrammmacher N-face, but weather changed in the afternoon and so we decided not to start. On our way back a line right of the Sagwand catched my eye – perfect for skiing.

Four days later I went to the Valsertal again (start: 2:00 a.m.). This time I had my skis with me, but no partner. So I trudged along on an old avalanche to the start of the face. After six hours I was on the top. I clipped on my skis and did my first swings. The snow was not bad and I was able to do the first skidescent of the face with only 10 metres of rappeling down.

29.4.11: The last skiing-tour for this year was meant to be special. Reini Scherer and I faced on a longtime project: the “Sagwandrinne”.

On our way up we still had our doubts because of the bad snow, but the couloir itself was in perfect shape and far less challenging than we'd expected. A worthy closure of a great and foremost accident-free skiing-season!