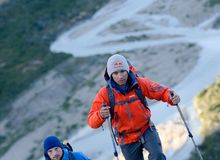 2008: Together with five friends I’m sitting in a small hut in the Cochamó Valley of Chile. As I’m flipping through the pages of an old, wrinkled climbing magazine that has probably been laying there for ages, I come across a picture of the headwall of Cerro Torre. I had seen many photos of Cerro Torre before, I might even have seen that particular shot before, but now, for the first time, I also see a line. A logical line though this stunning headwall that seems free climbable to me. From this moment on, the vision of free climbing this wall keeps crossing my mind day after day.


2012: It’s my third consecutive year here in El Chalten, the village on the “end of the road”. It’s hot, the wind is calm and the sky is cloudless. Looking at Cerro Torre’s headwall, I see streaks of water that built up in the past days of good weather. I had never before seen the headwall in such perfect conditions, never before I was so confident about my freeclimbing goal on Cerro Torre.

Already last year I had made it to the summit together with Peter Ortner, a superb alpinist from eastern Tyrol. This time, I think to myself, could be the big year – again Peter is with me to support my freeclimbing goal. He’s in strong shape and so am I, weather and conditions seem perfect – we are ready to go!

Peter and I pack our backpacks for the attempt. Two half ropes, one and a half sets of friends, nine stoppers, four ice screws, a couple of pins, four quick draws and five slings. In addition to that we take along two thin sleeping bags, a small isolation mat, a gas cooker, a gas cartridge and a couple of bars. It may sound like a lot, but actually we reduced everything to an absolute minimum.

Starting at 3 pm we make our way towards the mountains, surpassing countless trekkers along the way. After five hours we arrive at Nipo Nino, our first camp. Like always when the weather is good, there is a bunch of people there. All the way on the back end is a group of Americans, three Argentinean climbers camp more up front, Peter and I spread out our sleeping bags on the very front. Before going to sleep, we boil water, eat travellunch and trink some lukewarm coffee.

The alarm rings at 2 am. What comes afterwards is routine: boil water, get dressed, eat, drink, fill up drinking bottles, get packed and get going.

In the shine of our headlamps we surpass the Norwegians camp and proceed in direction Media Luna. There we put on our crampons. Hiking over crevasses and below huge seracs, we approach the 1500 meter east face of Cerro Torre. We then make good progress on combined terrain, reaching Col de la Paciencia in about four and a half hours. Here we take one last rest before starting the attempt.


Peter and I had climbed the pitches from the col up to the bolt traverse numerous times already. One attempt last year the conditions were so bad that the first two pitches nearly took us two hours. After seven hours we surrendered and repelled down. Today the conditions were great and it only took us three hours of climbing to reach Maestri’s bolt traverse, which traverses to the right through blank granite for three pitches. There’s no way to freeclimb this section, therefore I have to find a variation further left, on the south-east ridge.

Starting from the last belay before the start of the bolt traverse I climb straight up for about twenty meters. There I find two bolts that Ermanno Salvaterra had left behind 1999 when trying to climb the route with as few of Maestri’s bolts as possible. I clip them and keep climbing upward holding left along a thin crack, which leads to the edge of the slightly overhanging wall. I step up high with my left foot and press my body towards the south face. This section is very exposed, looking down I see nothing but 1000 meters of vertical rock. I climb another few meters and than clip one of my ropes to a pin, before the climbing gets really difficult. I climb a few more moves before I take a fall.
I pull myself up and try again, this time climbing directly on the arête. I manage to climb a bit further than before, but again end up falling into the rope. As I begin to doubt that this section is even free climbable, I try again. What else shall I do but try, there’s no other way up. Again, I manage to reach a couple of centimetres further but once more end up hanging in the rope. On my next try I’m finally able to climb the section and then place a friend about eight meters higher. The rest of the pitch up to the next belay is fairly easy.

Peter lowers me down and after a few minute break I take a second go. I have to climb this pitch without falling in order to be able to progress my free climbing attempt. Again I climb up to the two bolts, follow the narrow crack, step up high with my left foot and press my body up against the south face. I manage the eight difficult meters on the arête up to the friend and continue until I reach the belay. This time I’m able to do it without falling.

Peter follows me, pulling himself up the rope until he also reaches the belay. The remaining pitches up to the Iced Towers are pretty easy and we make quick progress. Even before dawn we’re able to pick a small ledge into the ice for us to sit on. This is the place were we will bivouac.

We prepare ourselves for a cold night, crawl into our sleeping bags and sit on our tiny isolation mat. Then we boil a bit of water and it turns out that our gas cartridge is leaking. In order to be able to boil water in the morning we abstain from eating dinner.

After a long night we get started around 6 am. We swing leads climbing through the Iced Towers and at around 9 am, we’re at the beginning of the headwall. I take my crampons off and also my alpine boots and socks. I stuff everything in my backpack and put on my climbing shoes.

I put all my friends, stoppers and pitons on my harness before climbing into the headwall. The first pitch isn’t really difficult, but the big, loose flakes make the climbing pretty demanding. The second pitch is wet, the loose flakes get even bigger and the climbing more difficult. In the third pitch I have to climb carefully around a big chunk of ice, which might fall directly on Peter if I happen to touch it. Up to this point we followed Maestri’s line in the headwall. A couple of days ago there were tons of bolts up to this point, now I was forced to place gear during climbing, as Jason and Hayden had deleted Maestri’s traces on the headwall.

Now I begin to climb into new terrain. Firstly a few meters straight up, and after placing a questionable stopper I traverse to the right and place a piton. The next meters are really demanding. Again climbing on hollow flakes –hoping they’ll hold- I climb up to a point where I can place two solid friends for a belay.

The last pitch: I climb five meters straight up, place two solid friends and clip one of my ropes to them. Then I traverse a long way to the right on little crimps and holes. After ten meters I manage to place another friend and clip my other rope to it. I’m now in the system of cracks that should lead my way to the summit. Without being able to place any reliable placements I continue to climb. Not until a few meters beneath the snowfield, approximately 20 meters above my last solid friend, I’m able to connect two stoppers, a piton and a cam as my last placement. Trusting my feeling that I wouldn’t fall I climbed the last meters into the snow.


It’s a weird feeling. Over three years the goal of free climbing Cerro Torre had been a part of me. Now I was finally able to pull it off. I have reached my goal. But with doing so, the goal is no more; it’s only the memories that remain.

Peter and I climb the ice mushroom, the very top of Cerro Torre, and then begin to rappel down. Already on our way from Nipo Nino to El Chalten we’re caught discussing new projects, and defining new goals for future memories to be made.