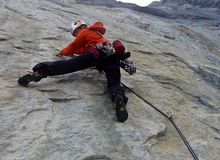 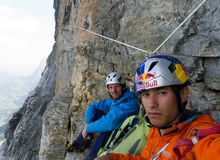 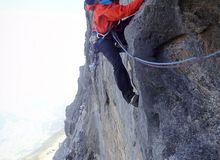 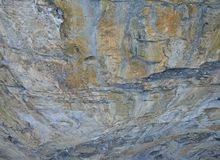 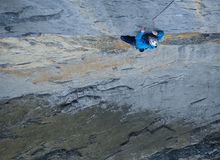 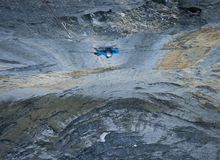 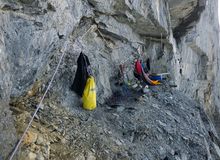 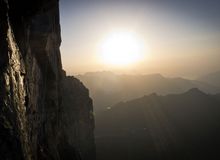 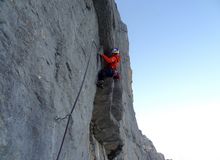 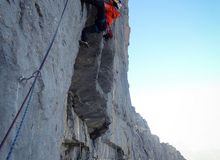 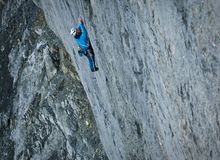 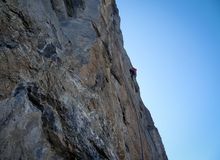 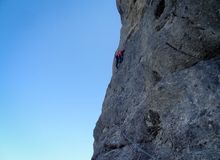 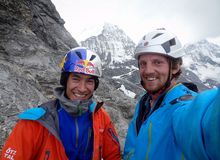 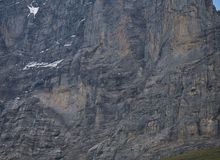 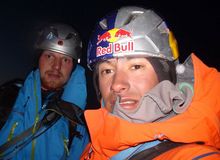 In 2003 Stef Siegrist and Ueli Steck put up a new route on the Eiger Northface. About five years later they managed to reach the top by free climbing after practicing the pitches a few days before. They climbed the route alternately, called it “Paciencia” and rated it with an 8a. Shortly after this landmark in climbing, Stef drew my attention to the route but it took some time until I ventured on the project.

Sunday, 21.8.2011:
Together with Peter Ortner I am about 300m above the bottom of the massive north face. According to a slight wind we put on our Gore-Tex jackets. We make our way further up, traverse to the left and start with the first pitch. Via some really wet slabs we reach the first difficult section. Because Stef and Ueli rated the pitch with 7b, I tried to climb it onsight but fell off after a few metres. The holds in the vertical face are hard to find. I climb until I reach the belay, Peter lowers me and I chance my luck again…

This time I manage the pitch but it is far away from a 7b. Peter and I take a short break before we start climbing the 8a crux-pitch, which I am able to climb in my second attempt. The next 200m are not that difficult and so we can reach the place for our bivouac (underneath the Czechs-pillar) at about 4pm.

Monday, 22.8.2011:
I did not sleep a lot last night because it was bitterly cold. Also Peter is not feeling very well. We are really thinking about rappelling but the good weather conditions force us to move on.
The first pitch is a 7c+ and the second one a 7b+, but I have a hard time climbing it. At the first attempt I have no chance and when trying it a second time a hold broke. Only in the third try I manage it. The following eleven pitches are still really challenging but I make my way from one belay to the other. In the end we are able to show a great performance in free climbing the whole route on our first attempt.

Comparing all the routes I have been climbing this season, I think „Paciencia“ is the most difficult of all. Although the hardest pitch is „only“ an 8a the 7bs and 7cs seem even more sophisticated.