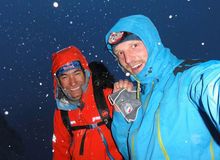 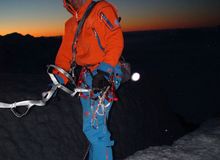 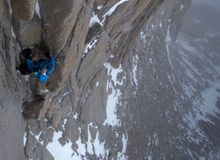 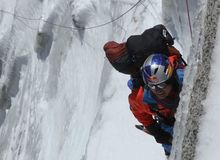 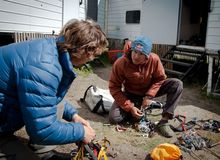 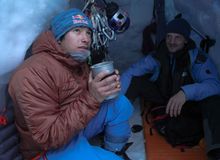 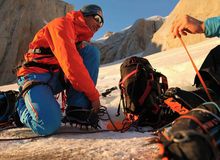 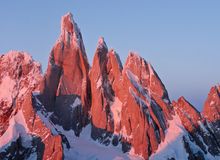 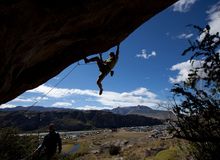 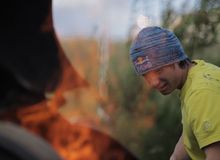 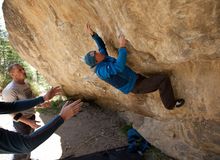 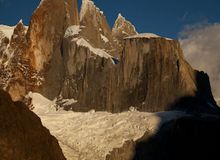 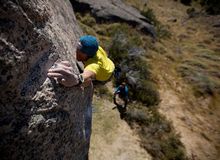 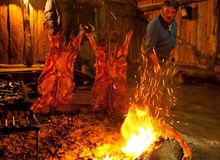 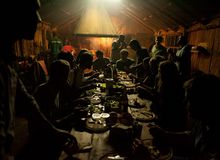 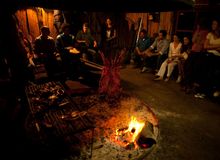 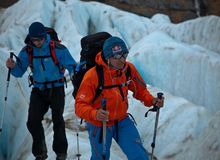 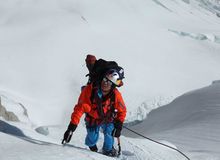 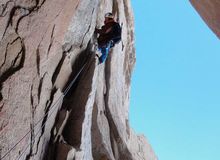 In the end, everything is easy. As I’m standing in the headwall on Cesare Maestri’s legendary compressor, I know that today nothing will stop us from reaching the summit of Cerro Torre. It is February 10th, 9.00 p.m., soon the sun will set and bath the top of this awesome mountain in warm colors. The right time to finally stand at the very top…

We went to Patagonia on January 14th via Buenos Aires. On January 15th we arrived in El Chaltén – without a large portion of my luggage, of course. Clothes and parts of my climbing gear left us waiting.

El Chaltén, the small place we wanted to start our expedition from, felt different compared to the year before, when I first tried to climb Cerro Torre. The silence the townlet on the fringe of civilization radiated has made way for a higher working temperature. The town has got faster and busier. We moved in a white container, just a few steps away from a small supermarket.

The next day we went fishing. At least my fishing rod had arrived. The plan was: every chance has to be taken. As bad weather had made serious attempts impossible over two whole months last year, we decided to stay shorter in Patagonia this time, but react more flexible on phases of good weather – “weather windows”, which Charly Gabl, an aeronautical meteorologist from Innsbruck, held out in prospect. Therefore, on the second day after our arrival we carried heavy backpacks filled with material to Nipo Nino, our base camp. We started from El Chaltén at 4 a.m. and got rewarded with a fantastic sunrise. At 11 a.m. we arrived at the camp, the weather was still good, so we came to a quick decision. We would go for “Aguja de la S”, a small summit in the Fitz Roy-chain, this very day. It’s a peak after all, and you never know…

We climbed up to the “S”, 1000 metres, easy terrain, unbelayed climbing. Then we roped up and six beautiful and challenging pitches were following. I was still wearing Peter’s clothes, because mine were still on their journey. But only the shoes were causing real problems, as they were about three numbers too big.

It was cold and the wind was strong. But the sight was okay, so we were able to enjoy this fantastic piece of land to the fullest. Whereby: There wasn’t that much time to enjoy…

After we rappelled down from the top, we went back to El Chaltén and arrived at about 11 p.m.. The result of the day was nothing to sneeze at: 60 kilometres on foot, height of 3000 metres, one peak. A good reason to be fast asleep.

As the weather turned bad again the next day, we whiled away the time by fishing and bouldering. Charly forecasted a “weather window” on January 26th, so we started for Nipo Nino on 24th and cherished a glimmer of hope, because the Torre appeared in its whole beauty. Those who have ever waited for this mountain to come out of fog and clouds know, that this is the exception to the rule.

The Cerro Torre was varyingly strong iced from top to bottom. So we hoped, that the good weather would “clear out” the biggest chunks of ice. Actually, we could watch some ice beginning to melt, but this brought up another problem: The meltwater ran into the cracks of our line and iced them. According to this, the terrain was quite difficult to climb.

As we started with our headlamps at 3 a.m., it was clear at once, that the summit would be out of reach once again. The ice in the cracks made quick progress on the route impossible. Up to the bolt-traverse, where the serious climbing starts, we needed 7 hours. The weather was okay. But the ice. We climbed the first half of the bolt-traverse before we decided to descend. We rappelled down and hiked the 30 kilometres back to El Chaltén.

The aim I set myself has already been ambitious the year before: I want to freeclimb Cerro Torre. 2010, with my friend Daniel Steuerer, we didn’t even get near this goal. On unfavorable conditions we were just able to climb up to the Bolt-traverse. This year my partner Peter Ortner and I chose a slightly different approach: Freeclimbing Cerro Torre is still the ultimate ambition. But therefore we have to get to the top first, to see, if the mountain allows a free ascent at all. If the conditions for climbing on Cerro Torre would again be too bad, there are plenty of other cool summits waiting for us. Means: We do, what is possible.

Another couple of bad weather-days passed by with fishing and bouldering. I deepened into a project I had already tried the year before. With our Spanish and Argentinian friends we had a barbecue. The meat we got in El Chaltén was extraordinary - in taste and quantity.

On January 31st we went to Nipo Nino again. The weather turned bad over night. It was snowing and storming and after we got lost at the glacier because of bad sight, we gave up on our plan to climb the “Claro de Luna” on Aguja St. Exupéry after 700 metres.

So there were some days of fishing and bouldering again. A couple of locals organized a boulder festival and we had good fun, especially at the party. For a change we only got to bed at 4 a.m. and as we woke up quite late on February 6th, we recognized that conditions looked good. So we quickly packed our stuff, marched into the National Park and arrived at Nipo Nino in the afternoon. The predicted “weather window” was too short for Cerro Torre. So we wanted to go for Cerro Poincenot (3002 m and the third highest mountain of the region) alternatively; a not too easy for an alternative.

We started at 3 a.m., our time by now. We walked up a back beneath the Aguja Desmochada, climbed up a groove, which was covered by a big Serrac. We heard a rumble from time to time, but it seemed as there was no ice falling down from this big icefall. Along the “Carrington-Rouse” we reached the top. But up there - not a bit of laxity. The wind was so strong we needed to anchor with all extremities to take our summit foto, but even so we’ve nearly been blown away. Our plan to rap down to Nipo Nino along the westface was inoperable in this storm. So we descented along the east side. Rappelling down about 1000 metres and then walking back to El Chaltén via Glaciar Rio Blanco and Glaciar de los Tres for about 7 hours. At 2 a.m. we were back at our container.

But the following night wasn’t very long as well – Patagonian summits have to be celebrated. In the morning weather still looks okay, although Charly predicted that the “weather window” would close.

What should we wait for? The same evening we hiked back to Nipo Nino, arrive at 11 p.m. and go to sleep for about 3 hours. While these 3 hours the wind is lapping against our tent like a rhythm on a tambourine. So no thoughts about sleeping. We lie there in silence and wait until the clock strikes 2 a.m.. The ascent to the shoulder is in great condition. At 9 a.m. we’re there, boil some water and get a rest; I even get half an hour of sleep. Then we climb up to the bolt traverse, I have never been beyond this point. It’s the first time we put on our climbing shoes. The same distance we needed 7 hours to get over a couple of days before is now done in 2 ½.

We exchange the climbing shoes for our boots again. A sorrowful look at the weather, but it seems to be firm. We climb up to the Iced Towers, finally, we get a serious chance to reach the summit. It’s about 2.30 p.m. We follow Cesare Maestri’s compressor route and I’m scanning the wall for cracks and flakes, looking for possibilities to climb this route without the assistance of technical equipment. Doesn’t look bad, but not now. Our focus at this moment: up!

It’s 4.30 a.m. when we reach a serious problem. Beneath the headwall, there are bolts at about one metre interval stuck in the wall, the so called bolt ladder. But the wall is iced, no chance to ever find the bolts. We have to elude. At the left, we see a gully - an iced crack, about 60 metres high and less than one metre wide. We’re working up our way in this crack, an ice axe in each hand but not able to reach out wide enough. It’s gruesome and exhausting and to cap it all, the gully is highly dangerous. The whole ice that’s breaking above will hit us – that’s what Peter knows, that’s what I know.

A couple of times I hear something coming my way and as a precaution, I’m bracing. But nothing happens. Maybe just it’s just fantasy.

Then a rumble, very short, and a moment later the hit; a nasty, intense hit of an ice chunk totalling two footballs, that’s crashing on my helmet. My helmet’s broken, my shoulder hurts. Shock. I’m trying to move my head in circles, only then I can believe that nothing much worse happened.

We climb in the headwall and overtake a Canadian party. It’s 6 p.m.. We climb up to Cesare Maestri’s compressor. What a comfortable belay. Today we’ll make it to the top.

It’s Peter’s turn to lead. The Bridwell pitch seems to be the last difficulty on our way to the top. Peter copes with it with accelerated effort. I’m following. Climbing up a snowfield, followed by the famouse ice mushroom. I climb upwards on the rime ice. The sky looks golden. The sun has set by now and the light is so beautiful, like it’s to be seen nowhere else. It’s just a moment we’re spending up there, but these minutes, I’ll never forget.

We rappelled down for 3 ½ hours, slept for 3 hours at the shoulder and walked back to El Chaltén straightaway. There was only one wish left: Something to eat. And stretching our legs.

A few days later another “weather window” opened. I asked Peter if we should go for Fitz Roy as an add-on. He agreed and we went to the beginning of climb. But then we turned round. For this year we’ve had enough.