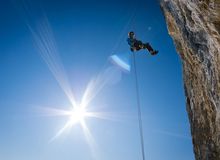 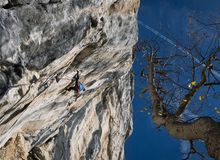 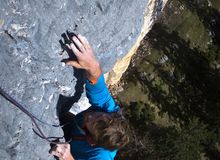 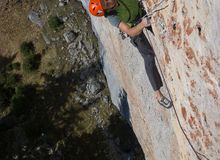 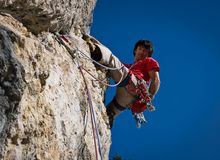 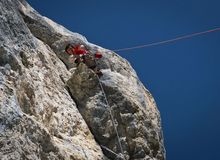 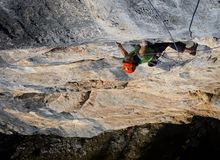 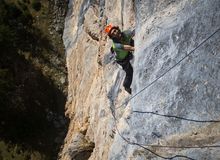 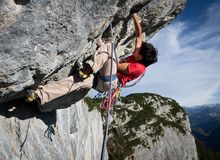 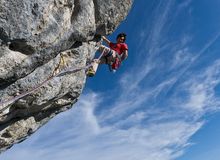 Together with Peter Ortner I‘m standing beneath the heavily overhanging Sonnwand near Lofer. Actually we wanted to try the route Donnervogel today, but now the Stoanmandl, a route 50 metres to the left, is attracting us much more. We change our plans and I start to climb the first pitch of the Stoanmandl.

The first pitch is rated 8b. As I went climbing for the first time after my India-expedition two weeks ago, I wasn’t able to do a 7b. But now I seem to be fitter again. I’m saving myself from one resting spot to the next and climb the pitch onsight.

On the following pitch my foot slips away at the first move and I’m falling in the belay. I pull myself up to Peter again and finish the pitch at once. It’s more probably a 7c+ than a 8a+. The rest of the route doesn’t appear as difficult and I’m finishing the pitches without any problems.

The Stoanmandl is a genious route. The first pitch is fully equipped with bolts and marks an extreme endurance test, meanwhile the second pitch is technically more challenging and you have to place some gear by yourself. The remaining pitches are quite unspectacular, but still beautiful.

Two days later I’m standing again beneath the Sonnwand. This time I’m on the way with Reini Scherer and this time we stick to our plan to climb the Donnervogel-route.

The first two pitches aren’t that difficult but extremely beautiful to climb. The rock is bomb-proof and quasi made for placing friends and nuts. After that, the rock is getting a bit splintery. The fourth pitch is the crux-pitch. It is, just like the Stoanmandl, rated with 8b. The style though is completely different. The wall is just slightly overhanging. At first you traverse a crack 15m to the right. After that, there’s a difficult boulder on very small holds and feet and then again a crack of about 10 meters.

I need several tries until I’m able to climb the single moves in a confident way. But with my second try from the belay I succeed. I need a second try for the fifth pitch too, but once you know the sequences, it’s probably not more difficult than 8a. The last pitch, an overhanging crack, shouldn‘t be climbed without tape gloves and with the right technique it‘s not harder than 7c+.

As far as I know, I managed to do the first redpoint repetition of the route Donnervogel and I can only recommend to make the most of the this year’s sunny autumn days and climb those routes!